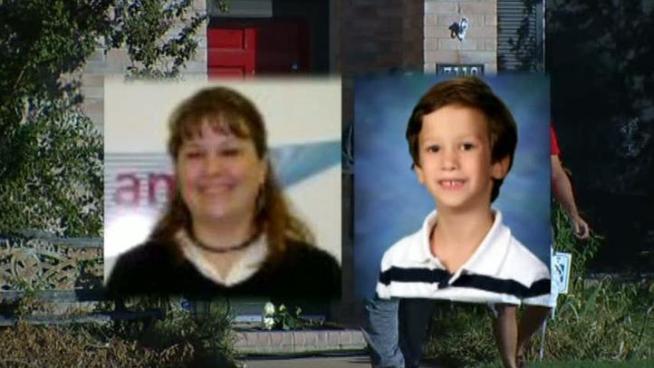 Police say the apparent murder-suicide occurred shortly after a judge awarded custody to the boy’s father.

A woman shot and killed her 7-year-old son before turning the gun on herself late Friday morning in Sachse, police said.

Sachse police were at the home in the 7100 block of Longmeadow Drive as a precaution when her estranged husband, Rodney McCall, arrived to pick up his son.

McCall had received sole custody of the child in a court hearing at 10 a.m.

“The father knocked on the front door,” Sachse police Chief Dennis Veach said. “We were simply standing by and at both front and rear of the house when we heard three shots from within the house.”

Veach said police had been to the home on several locations but there were not allegations of serious violence.

Police said Hayslett-McCall and her husband were in the midst of bitter divorce proceedings. Veach said police did not know why the father had been given sole custody of their son.

Hayslett-McCall had accused her husband of molesting their son last fall.  A grand jury later found no evidence of a crime, and McCall was cleared.

But McCall had lost his job as a high school teacher.

McCall’s attorney told the Wylie school board in November that the case was “an allegation brought by a woman who is about to lose custody of her children,” the Wylie News reported.

He also told the board that Hayslett-McCall, a former police officer who has a doctorate in criminal justice and a master’s degree in psychology, knew how to manipulate the justice system, the newspaper reported.

The couple had been battling over custody of Eryk for more than a year.

They filed for divorce in Collin County in March 2010, and temporary custody orders were in place in April 2010. By November, an attorney was appointed for the child.

The judge ordered psychological evaluations in January 2011. Jurors were sworn in on Monday for opening statements, and McCall won custody of his son Friday.

Lt. Marty Cassidy said the officers were visibly shaken but did the best they could in a really bad situation.

“It’s a terribly, terribly sad, tragic event, you know, when one person makes a life decision for another who doesn’t have a vote in that decision,” Veach said.

Police said although other family members were at the residence, they were outside greeting police when the shooting happened.

Officials will work with the Collin County medical examiner to confirm the cause of death, but it appears the woman shot the child and then herself.

Hayslett-McCall was a professor at the University of Texas at Dallas. UT Dallas released the following statement:

“The UT Dallas community is deeply saddened to learn of this tragic news. Our thoughts and concerns are with the family. Karen Hayslett-McCall left the university faculty in June 2011 and has had no official position with the university since then.”

Was this custody battle worth it?