Its Almost Tuesday – Read Our Story on http://www.lawyersandsettlements.com

Dallas, TX: Mary’s abusive husband, Robbie, vowed to make her pay if she left him. She dared escape domestic violence, but due to additional victimization by Child Protection Services (CPS), the police, and her own mother, she lost her 8 year old son.

“After my divorce I moved with my son to a ‘safe state’, Florida. Robbie followed me there so I had to get a domestic violence protective order and he wasn’t allowed within 5 miles of us. He did try to contact me by email and phone on holidays, which I logged and reported to the local police but it wasn’t considered severe enough for an investigation.”

“For six years in Florida I was happy. I’d gotten married and was living the typical life of barbecues on Sunday and PTA. But stress from the aftermath of that previous abusive marriage and living in constant fear made things difficult and my new husband and I separated. In October 2003, with my family in Texas I figured we’d be all right there for a couple months but that was a fatal mistake.” 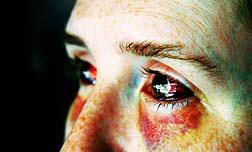 It didn’t take long for Mary’s ex-husband to catch up with his prey.

“Just after the holiday season I reported his stalking behavior and calls to the police department of a suburb of Dallas/Fort Worth. On at least eight occasions they said, ‘oh that’s a Florida order, we’re not going to uphold that in Texas’.”

“Getting away with minor violations made Robbie bolder. He conspired with my mother to take my son away from me, even though he wasn’t his biological father. Together they made allegations against me of mental and emotional abuse, of drug use, and they even claimed I was in a baby-killing cult. When my son was born I cleaned up my life and stopped any drug use. CPS did four different tests and found nothing at all so in mid 2004 I was cleared of all charges of neglect and abuse.”

Mary and her son prepared to move back to the safety of Florida. Their nightmare was over… or so they thought.

“In May 2004 my son went to church and never came home. He was abducted. When I reported it the police, they and a CPS agent showed up at my door, not to give me news, but to get me to sign another accusation of abuse from my ex-husband and my mother. I refused. My attorney tabled a motion to have my son immediately released to me but on day the court order was signed, the police came and took me to a mental hospital for ‘observation’ based on a false affidavit.”

“The doctor couldn’t find any reason to detain me but during that 24 hours I was in that hospital Robbie, GrandMommy, the police officer and a CPS worker broke into my apartment and stole over $10,000 worth of property including all my home videos and photos of me and my kids, all my legal files and evidence, electronics, medication and even my wedding ring. Even our dog was gone.”

Mary’s son was placed in a foster home.

“Parents have to do something like take parenting classes, go to rehab or counseling to have a chance at getting their kid back. I did but they said I didn’t complete their services just because I chose to get my own counselor, not the one of their choice. They called me uncooperative if I did anything that was against my civil rights but even though one of the case workers wrote that my case wasn’t of abuse but of child custody they do retaliate, I hate to say. They ruled against me because I challenged when I knew things weren’t being looked into, like my accusation of Robbie molesting children.”

“The last time I saw my son was just before Christmas 2004. The case worker arrived without him and said, ‘we forgot to bring him’. But that wasn’t possible. He’s nine years old and he knows when it’s Tuesday. The next day, December 22nd, they brought him. He had a black eye, blood on his shirt; he’d been beaten. I never saw him again.

That’s when I started my blog almosttuesdays.com which came out of a poem I was commissioned to write for Child Abuse Awareness month. It was all the things my son had said to me during out visits that we shared that no one else knows about.”

“When I realized he wasn’t coming home I fell apart. I was in such shock. I didn’t have an attorney so I represented myself. Fortunately I’m a paralegal so I could write my own pleadings but they were just ignored. My son’s name was changed, he lives with GrandMommy and I’m not allowed to talk to him. Then Robbie was jailed in 2006 for child abuse. I’m too tired to fight. How do you find an attorney when those hired by the state to work on behalf of the kids say it’s too hard to go up against the system?”