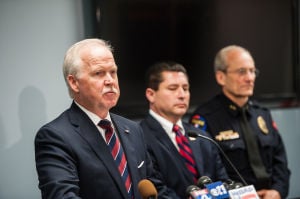 A former Plano ISD employee with a penchant for high-stakes gambling has pleaded guilty to federal charges of embezzling at least $2.5 million from the district.

Kris Wilson Gentz, 59, could receive up to 60 months in prison for his role in a financial fraud scheme that lasted from about 2004 through December 2013, U.S. Attorney Malcolm Bales announced Tuesday. Gentz’s employment with Plano ISD, which began in August 2001, was terminated in December.

Plano ISD security officials discovered the crime in November and alerted the Plano Police Department, who in turn brought in agents from the FBI and the U.S. Department of Education after the magnitude of the financial loss was discovered. Plano PD Chief Greg Rushin said Plano ISD cooperated fully throughout his department’s investigation.

Malcolm Bales, U.S. Attorney for the Eastern District of Texas:

Mr. Gentz’s job was to make sure the Plano ISD buildings and campuses were properly equipped with fire and security alarms that were correctly maintained.

Gentz, the manager for security and fire systems in Plano ISD, was a part owner of two shell companies that were on the list of approved Plano ISD vendors, Bales said. These companies would bid on district services, bids that were approved by Gentz in his management role. The companies submitted false invoices for work that was never completed, while Gentz and at least two co-conspirators, one of which is since deceased, pocketed the payments made by the district.

“The charged scheme was not particularly complicated,” Bales said. “Mr. Gentz’s job was to make sure the Plano ISD buildings and campuses were properly equipped with fire and security alarms that were correctly maintained. He was given complete authority to accomplish this job, and as a former Frisco police officer, he was trusted not to abuse this authority.”

Bales said the total amount of money stolen is not available yet because of the length the scheme was carried out, but added the total amount should be less than $7 million and that Gentz is cooperating with authorities.

“The agents and prosecutors are working hard to do financial traces [on the money], but the sobering truth is that the defendant, Mr. Gentz, has probably gambled away much of the stolen money at nearby casinos,” Bales said, adding Gentz spent nearly every weekend at casinos in Shreveport and was what casinos would consider a high roller, or “whale.”

Restitution will be ordered in the case, Bales said, but with much of the money likely lost at casinos and therefore no longer in Gentz’s possession, it is unknown how much of it will be recovered.

“The casinos had no idea that Mr. Gentz was anything more than a well-paying customer,” Bales said. “In fact, they cultivated his business because he was such a spectacular loser at the games.”

The investigation is ongoing, but there is no evidence that any other Plano ISD employees were involved in Gentz’s crimes or that any campuses or students were placed in danger because of the fraudulent billing scheme, Bales said.

While the crimes occurred for nearly a decade, Bales said it is not hard to see how they went undiscovered for so long.

“We are trying to find out [how it occurred] and if anyone else was involved,” he said. “When you give folks authority, you need to check that authority … In this case he was given discretion that he obviously abused. The idea that he could select the vendor and then approve the invoice turned out to be a bad idea.”

Following the announcement of the guilty plea, Plano ISD Superintendent Richard Matkin issued a statement saying the district is working to prevent similar crimes from occurring in the future.

“In light of this criminal activity, we are reviewing all purchasing protocols and have noted the findings of the investigation,” he said. “Despite this distraction, our students and teachers remain at the heart of our daily endeavors as we keep our focus on instruction. Our school district must be ever watchful for criminally minded individuals.”

Kris Wilson Gentz waiver of indictment and list of charges