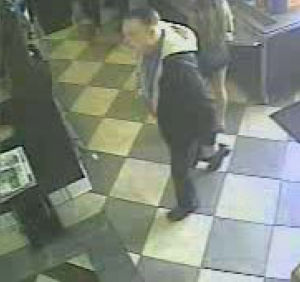 McKinney police are asking for the public’s help in identifying this man,
who they believe inappropriately touched a juvenile at McDonald’s last month.

Staff report For updates on this story, stay tuned to starlocalmedia.com. | Updated 2 weeks ago

McKinney police officer Sabrina Boston said police were inundated with public tips regarding the suspect after publicizing his description and the security camera photo.

The man has been located, she said, but no arrest had been made as of late-afternoon Friday.

If arrested, the man could be charged with indecency with a child.

Police are looking for a man they believe inappropriately touched a girl at McDonald’s last month.

The victim told police an elderly man touched her breast and buttocks over her clothing the afternoon of Feb. 15 at the McDonald’s at 402 N. Central Expressway in McKinney. Security cameras showed the suspect speaking to a woman wearing a red shirt at the restaurant.

The suspect is a white male in his late 60s or early 70s, weighs between 215 and 235 pounds and has brownish-grey hair. He was last seen wearing a dark hooded jacket with light-colored lining, dark pants and dark shoes. Police believe he was driving a dark-colored, four-door sedan.

Anyone with information regarding this incident or who can identify the suspect should contact Sgt. Damian Guerrero at 972-547-2711 or dguerrero@mckinneytexas.org.